The coronavirus claims daily headlines across the nation and world. The sensational reports tend to focus on tragedies and the ultimate reality that sicknesses can be deadly. Other positive realities and facts exist as well. The coronavirus is a common virus that causes an infection in the nose, sinuses, or upper throat. Most coronaviruses do not accompany the deadly outcomes catching media headlines. 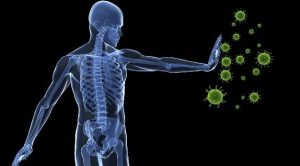 One drop of blood contains five million red blood cells, seven thousand white blood cells, and thousands of platelets. These cells work feverishly to heal and defend the body against foreign invaders. The most amazing element of the process comes from the fact that the body adapts and responds naturally and without a conscious decision to do so. The entire process of adaptation and response operates under the direction of the central nervous system.

Scientists discovered the unique connection between the central nervous system and the immune system and continue to compile research and evidence about the process. Chiropractic plays a key role because of the spine’s relationship with immunity. Research shows that when the spine remains immobile of misaligned, the body operates in a heightened state of stress equivalent to being in battle. Operating in a heightened state of stress weakens rest, immunity, and growth within the nervous system. Gentle Chiropractic adjustments improve immunity by allowing the nervous system to function at maximum capacity for healing and repair. Chiropractic adjustments increase movement and improve alignment while reducing stress. Evidence shows that people who receive regular adjustments report stronger immunity after beginning Chiropractic care.

Research from 2010 determined that patients who received Chiropractic adjustments showed increased levels of a specific signaling molecule in the body called Interleukin-2. Interleukin-2 regulates the activities of white blood cells which are responsible for immunity. The molecule impacts the body’s natural response to microbial infection and helps the body recognize and create specific responses that neutralize foreign invaders. This protein molecule was found to be higher in those who received Chiropractic spinal adjustments when compared to those who did not.

The primary focus of a Chiropractic adjustment does not center on treating a specific symptom or condition. The increased health and function from an adjustment represents an outcome which originates when interference is removed from the nervous system. While other professions focus on changing the environment to suit a weakened body, Chiropractic pursues strengthening the body to suit the environment.