A recent study shows that nearly 80% of the population between ages 18 to 44 keep cell phones with them almost every waking minute. Most estimates showing only having two hours a day without their phone in or near their hands. The stress of constantly looking down at a phone or device creates a dangerous condition known as “tech neck”. Body and spinal design do not come equipped with enduring the constant and sustained neck pressure. The need for chiropractic care continually grows as more people of all ages realize the imperative need to preserve the health and quality of life for both themselves and the next generation. 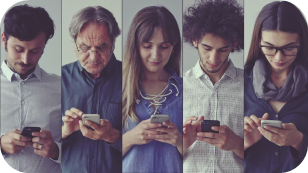 According to a 2017 study titled “Text Neck” published in the Spine Journal, spine surgeons noted a significant rise in the number of patients complaining of neck and upper back pain. Many of the patients were children. The research showed that “text neck” added extreme amounts of pressure and tension on the spine as the head position extended forward and downward to look at an electronic device. The average head weight on the neck amounts to between 10 to 12 pounds when resting in a neutral position. Any forward head flexion will add weight and pressure to the spine at varying degrees. Every 15 degrees of forwarding neck flexion adds between 9 and 10 pounds of pressure on the spine. 60 degrees of forwarding flexion creates an extra 60 pounds of pressure on the spine. Neck flexion varies between 45 and 60 degrees when texting. A new diagnosis code called “text neck” has been established to categorize and address the damage incurred by common daily activities like using electronic devices.

A study of over 7000 young adults showed that persistent neck and upper back pain directly associates with time spent text messaging. Accelerated neck and mid-back spinal degeneration become a likely side effect of the forward head flexion often experienced through texting. The increase in disc pressure during flexion contributes to disc degeneration, disc herniations, and abnormal neck curve alignment.

Chiropractic remains one of the most important and effective proactive interventions needed to minimize and reverse the negative effects of texting. The spine’s intimate relationship with the central nervous system details why having a text neck poses such a serious threat to the health of current and future generations. The nervous system becomes imbalanced when the spine changes from an optimal position and normal mobility. Stress and imbalance in the nervous system lead to a myriad of unwanted symptoms involving immunity, digestion, attention, energy, breathing, headaches, and heart problems. Chiropractors detect and correct spinal misalignments to remove stress from the nervous system and allow the spine and body to function as it should.

5 Simple Strategies to Prevent or Minimize the Effects of “Text Neck”
1) Hold and view cell phones and all electronic devices at eye level.
2) Text with two hands. Using both hands creates more symmetry and minimizes spinal imbalances.
3) Take frequent breaks from phones and computers throughout the day to move.
4) Utilize 20 second stretches – Pull arms and shoulders back while tilting head up to look up every hour.
5) See a Chiropractor regularly.